Select matches will probably be broadcast live on Ustream on that day as well. Check out Aaliyah Kawate’s awesome looking AC emblem after the jump: 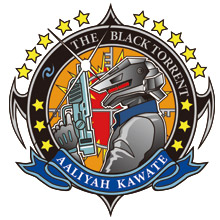 Classy if you ask us. If you’re feeling like it, go fight From Soft’s mascot online for a few matches on August 20 and try to impress him. As for the Black Torrent’s skill level, you be the judge. You can see much of his awesomeness/silliness at his own blog.

You can view more info on his online appearance this August 20 in From’s official Armored Core site. No word on what times he will be appearing on that day, but we’ll update you guys as soon as we find out.