Don’t let your hard drive die on you! Forum member Cabs has recently shared a small secret to making silent PCs. The method reduces vibration by attaching “shock absorbers” in the form of garter bands to the hard drive case. This method will also make your PC’s hard drive last longer, as it lessens vibration, making it less likely for the hard disk head to be misaligned and killing your hard drive.

Here are some modifications/upgrades I tried on my rig to lessen its operational sound output ^^
I decided to post them here to give others some idea if they also like to pipe down their noisy CPUs Big grin.

One factor which contributes to noise generation is vibration. Namely, internal components with moving parts which transfers those vibration to the case itself.
Hard disk drives for example generates strong vibrations as it is used more or as it ages due to its mechanical motor. One good way to counter this is to remove any fixed contact with the case itself. To do this, I made use of garter (bungee) cords to replace the the fixed hdd placement bays. 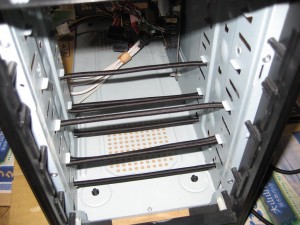 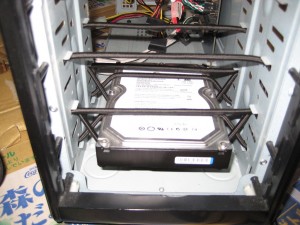 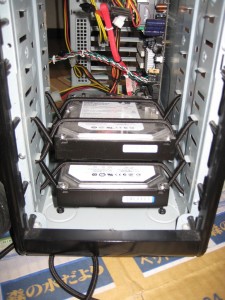 By doing this, I eliminated the vibration problem and also added a strong shock resistance as a bonus for the hdds Woot

Another factor which adds operation noise are the fans in the CPUs. One cannot just remove them because they are key components in maintaining good airflow within to prevent heat buildups and to provide cold air to the different components in your CPU.
Two factors mostly affect the noise output of fans. First one is the size, bigger fans tend to create less noise and can deliver greater airflow without the need for higher rotational speeds. The second factor is the rotational speed of the fan (measured in RPM).
note: fan motor technology also helps ^^
In terms of noise output, it is measured in decibel (dB). The lower the value, the lower the noise is. 20dB is the tolerable range IMO Big grin

In order not to sacrifice anything, I made use of a multiple fan controller. This enabled me to freely control any of the 4 fan’s speed connected to it. As a bonus, it also provides me with real time temperature readings inside my CPU. This way, I could lower the fan speed lowering the noise it creates when i’m not doing any taxing operations on my PC. 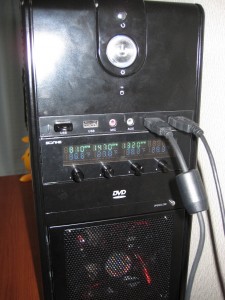 It seats comfortably in my front panel eating 1 drive port ^^
note: for these kind of fan controllers, fans with 3pins are needed. Ordinary case fans mostly only has 2 pins used for power. The 3rd pin is used by fans with circuits that can report their current rotational speed.
Controllers without displays are also available and are quite cheap compared to the ones with displays 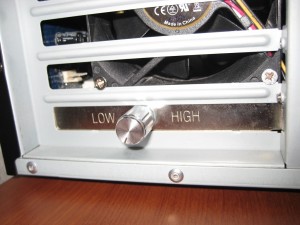 My previous setup only has 1 controllable fan shown above for example.

Personally I think this was a clever and resourceful way of putting shock absorbers for a PC hard drive w/o resorting to anything expensive. Pretty easy to do as well even if you just know how to open up a PC.

You can follow look at the original post or add more info at our DIY custom PC mods thread started by Cabs.