Watching these shows planted a seed in these kids, which became evident as they grew up. These were the same kids who later began drawing giant robots in class while pretending to listen to their teachers drone on and on, the same kids who began buying robot action figures and mecha model kits with their saved-up cash and the same kids who began playing Macross on their family computers, MechWarrior/Battletech on the Super NES, Super Robot Wars on the Genesis, Krazy Ivan on the Saturn and finally, Armored Core on the PS1 and PS2.

Let’s face it: a lot of us play Armored Core because it’s one of the few games that cater to our innate desire to build our very own mecha. I mean, how cool is a game that allows you to choose parts for the creation of an 18-meter tall walking engine of destruction? You get to decide whether you want to mount missiles on it to emulate those Veritechs you saw on Robotech or you’d rather use dual chainguns and laser rifles to replicate the moves of the mobile suits on Gundam Wing. Choose a set of legs that lets you design an ED-209 look-alike or one that looks like one of those Hunter-Killer tanks from Terminator 2. With the insane amount of parts in the games, the possibilities are endless.

This desire for mecha customization may have originated from childhood fantasies of being just like the very heroes they grew up watching as they piloted their mecha and always defeated the bad guys. The problem is, most of our fantasies involving mecha are just that: fantasies. Technology of that sort seems so close yet so far away. I’m sure you’ve all asked yourselves that one question: How long is it before we get to see any real mecha?

Sadly, the very real answer is: not soon enough. Even though a lot of the concepts introduced in the Armored Core series theoretically could be realized within the next few decades, as our current technological state is exponentially increasing faster than in the past 20th century, its still isn’t moving as fast as we would want it to. A lot of questions have to be posed: Power problems, frame structure strength, weaponry designs and stability issues. How do you get a 40-foot tall mecha to move? What kind of computer system should be developed to control its mobility systems? How do you design a power supply to fit inside it? What kinds of metals are strong yet light enough to be used in its construction? 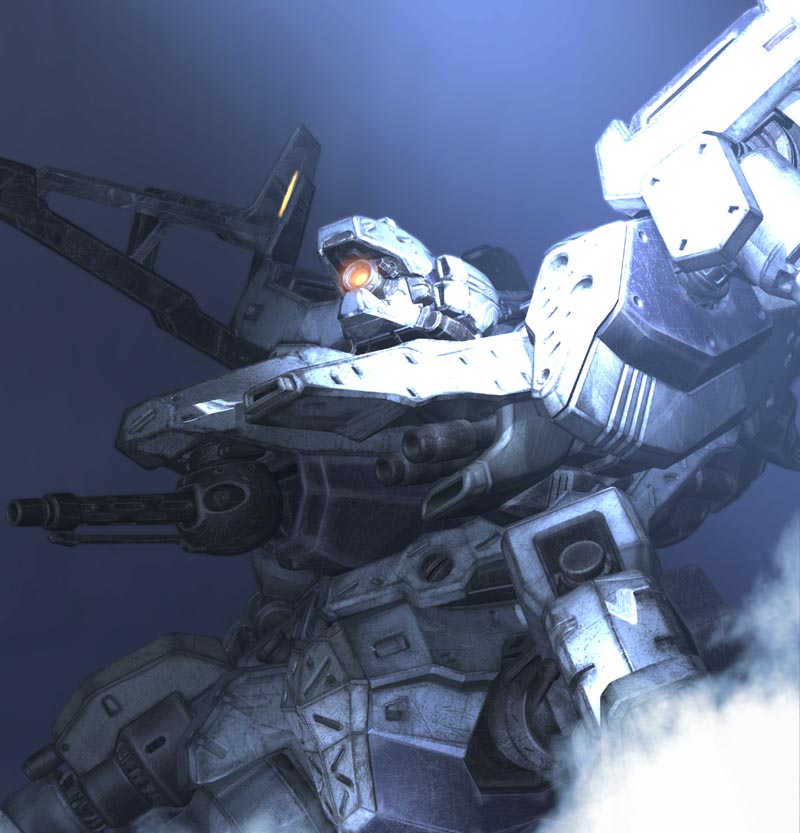 A very real matter would be the mecha’s power supply? If most of the mecha that we see are around 18-30 meters tall, then that would roughly mean a man-sized power unit. Even if someone were to somehow devise a power unit that small, what kind of energy would have to be used to generate enough energy to make a mecha move? Fusion reactors aren’t feasible yet because we still don’t understand enough of the technology to make a working small-sized fusion reactor. Gas and battery power is too inefficient to enable the kind of performance that we would like to see. Solar energy would take too long to gather and runs out too quickly. An alternative to micro-fusion reactors would be smaller versions of the fission reactors that are used in nuclear power plants or highly-concentrated fuel cells. Fission reactors are already used in submarines but are very dangerous in terms on radiation exposure and nuclear meltdown. If anything were to go wrong with a device of this sort installed on a mech, the consequences for the pilot would be fatal to say the least. Don’t even get me started about the cost of developing these things? The budget required for building even just one unit might be enough to bankrupt a small third-world nation.

Another question would be about the weapons? Sure most of the armaments we see in the games are basically scaled-up versions of existing weapons systems utilized by armies around the world. Machine guns, bazookas, sniper rifles, missile and rocket launchers are all standard wargear but how about the more exotic ones like laser rifles, plasma cannons, laser blades and energy shields? Currently, some units of the US military in Iraq are using laser devices mounted on Hummers to destroy weapon caches and mines. The problem is that the aforementioned devices are huge and take up most of the available cargo space of the Hummers themselves, with just the forward compartment left for the crew. Another thing is that the output of the weapon is nowhere near the destructive capacity of the Wing Gundam’s Buster Rifle or even our beloved KRSW.

There is one laser weapon that may remotely approach the power of these. I don’t know the name of it but I’ve read somewhere that the US Air Force is developing a laser weapon that would be mounted inside a modified 747 and it would be used as a mobile missile-intercept system. The power unit and size of this thing alone is rumored to be large enough to fill the plane’s fuselage alone. Laser blades? Sure there are lasers that are used to cut metal but how about lasers that are big enough and powerful enough to sever a mechanical limb in one swipe? Sorry but I don’t think I’ve heard of anything approaching the beam sabers, laser blades energy lances and all that. The power required to amplify lasers into huge ten-meter long blades of light just isn’t around yet as is the technology for generating that kind of intensity. It could be possible to modify existing laser devices to produce coherent lasers like that but maintaining the sort of long-term form like a laser sword could also mean cooling problems for such a device, so something like an AC’s laser blade or a mobile suit’s beam saber may still be far in the future.

Okay, suppose that someone was able to construct a frame for a mech. No matter what the design, how are you gonna move that thing the way they do in the games or in the animes and cartoons? A guy named Masaki Nagumo from the Sakakibara Kikai Company in Japan was able to build a small (read: 3.4 meters tall) bipedal robot that is equipped with rubber-ball cannons and is capable of walking at an incredible (read: sarcastic) speed of 1.5 kilometers per hour. The mecha is controlled by a set of foot pedals and control stick inside the cramped cockpit. One thing is that this particular mecha cannot hope to match the moves that we see in games and animes. The triple-flip 360° spin-jump that Trowa performs in the Heavy-Arms – forget it. The front-flip axe kick that Shinji performed in EVA-01 to knock down Sachiel – keep on dreaming. The high-speed boost-hopping that ACs are capable of – go somewhere else.

So what’s great about a mecha that moves at a pokey pace, is armed only with rubber balls for weapon and has a cockpit that provides only minimal protection for the pilot. Not much really, except that it is a first step towards that eventual goal of the gigantic war machines that so enthralled us in our childhood. These backyard mecha builders may one day be hired by the military to help design We may not be around when that kind of technology is realized but we can be sure that our descendants may very well be the pilots of those mecha and may play a significant role in the futuristic conflicts like those that we see so much of in shows we watch and games we play. For now, I’m happy with just daydreaming about mechs.