PACT III: ah, the day finally arrived. After planning the new regulations for so long, we finally got to try it out in a real tournament situation. And the results confirmed what was lingering there all along, but no one really pointed out… that the format was pure genius. Forcing players to create three distinct (and by distinct, I mean really distinct) ACs was the key to refreshing the way we approached the game as a whole.

Think about it: every round, a different AC to face. That means readjusting everything: your strategy, the tactics you will use, what kind of game you’re going to play, and so on, all while taking into account your opponent’s personal and general playing style. Quite a challenge, and as beastkiller said, it really forces you out of your comfort zone, which is always a good thing.

The matches were great. We had good variety of designs and playstyles.

Eventually we had a winner, and surprise surprise, who else would it be but the best among us? Congrats Leperman!

Click on the image below to see the whole story of the brackets. If the right side doesn’t make any sense, well let’s just say we have a winner, and leave it at that. Otherwise explanations would take all day. 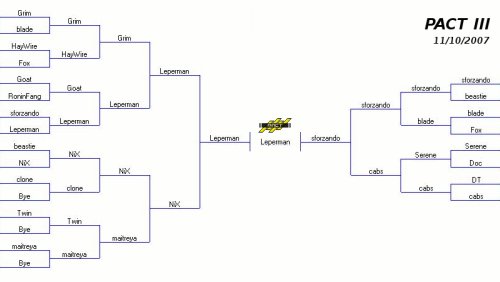 On the side there were some good Godzilla matches. Leperman and NiX make some excellent Gojiras. I don’t think they were beaten, haha.

Of course it wasn’t all AC, we got to play some real good games of both today and yesteryear. Master of Arena was served up for everyone, though I don’t think anyone got past Goatling in the Custom Arena. We also mixed it up with some Samurai Shodown, X-Men vs. Street Fighter and Bushido Blade 2. Then things got even more retro and soon it was Dragon Ball that was being played. 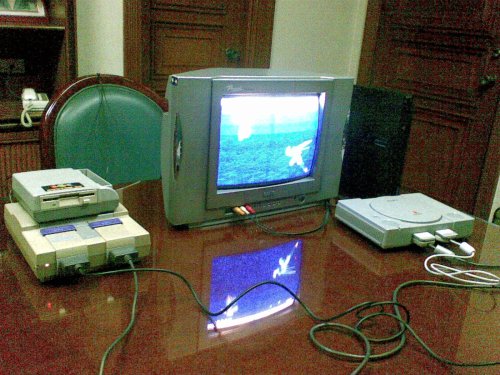 Finally, we rounded out with some Third Strike and Tekken 5. Fortunately for us, casual rounds would not be enough. An impromptu Tekken 5 tournament soon formed, which the participants enjoyed immensely. We saw a good mix of highs, mids, lows, crumples and juggles. And when the fingers were done bashing and the fighters were all collapsed, only one kangaroo was left standing. Congrats NiX!

Oh by the way, Doom Trigger kicks anyone’s ass in 3S and T5. For real. If he had been around at the time we started this he could have won the whole thing.

Special mention must go to our very gracious host for both days, sforzando. Allowing us to stay in your house up until the wee hours of the morning was more than kind, and as for the free food, well, I think that puts you in first place FOREVER.

As I said last time, the PACT gets better and better every year. Now not only is it just another tourney, it’s a veritable gameday. Let’s keep it alive, eh? But hopefully, not too soon… unless you’re talking about Tekken or Street Fighter.