A recent news coverage by Japanese site Game Watch features a lot of new screen shots showcasing new parts and rankers in the upcoming Armored Core: Silent Line Portable for the PSP. This includes the previously featured “Bunny Head” now officially known as the MHD-HH-ARSH and a new head part known as the MHD-72-50. In addition, two new arena rankers will be featured in the game including the Victoria AC from the Brave New World side story and a new ranker opponent incorporating the MHD-72-50 in its design. More pictures of the parts and the new arena rankers after the jump. 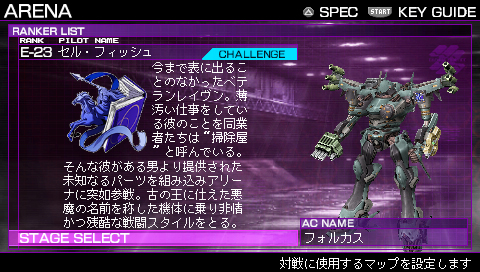 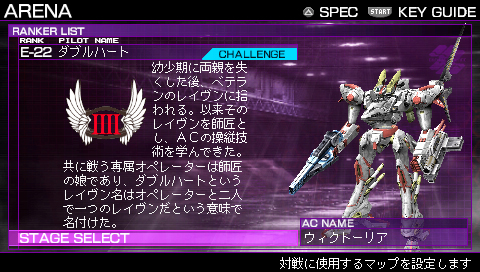 It is interesting to note that the 2 new heads are both low drain and high AP parts, which could mean radical changes in SL portable’s head balance. The new MHD-72-50 looks like a distant cousin of the RACHIS head part AKA the SPIDER in AC NX-LR. Silent Line Portable goes on sale in Japan on 19 November 2009. An English release has yet to be announced.

[via: Mecha Damashii and Game Watch]