Raven Republic’s triple attraction event finally pushed through, and boy was it awesome!

When Maitreya and I arrived at Leperman’s house at around noon, most of the members were already there, with some playing Blazblue and others already playing LR. In the shadows, a few enterprising individuals had already begun harvesting prawns!

Outside, stacks and stacks of burgers, buns, and condiments were spread all over just waiting to be consumed. Super Chef Hempire brought some awesome sauces and toppings and he even managed the grill for us for pretty much the whole day. What’ll we do without you, Hemp? :(

After stuffing myself with two burgers, I went straight to organizing the tournament specifics. Even with PACT 1 third-placer Twin-Skies running late, we went ahead and drew lots to determine the pairings and placements on the brackets. Below is how the pairings went:

With the pairings already known, teams passed the time waiting for Twin-Skies and RoninFang by devising strategies, revising ACs, and speculating on what the opposing teams were most likely to do.

Quite naturally, everyone took note of the truly fearsome pair that was Leperman and Beastkiller. There was undeniable potential behind Leperman’s legendary skill and adaptability combined with Beastkiller’s massive armor and firepower. And because of that, several teams actually consulted with each other, Survivor style, on how best to take down the feared team.

As soon as everyone finished with the preparations, PACT 5 finally began. LX crushed heavies, orbit cannons melted tanks, and HPs and ROC4s grilled everything. When the dust settled, we concluded what was probably our most fun tournament so far. The image below illustrates the story of the tournament. 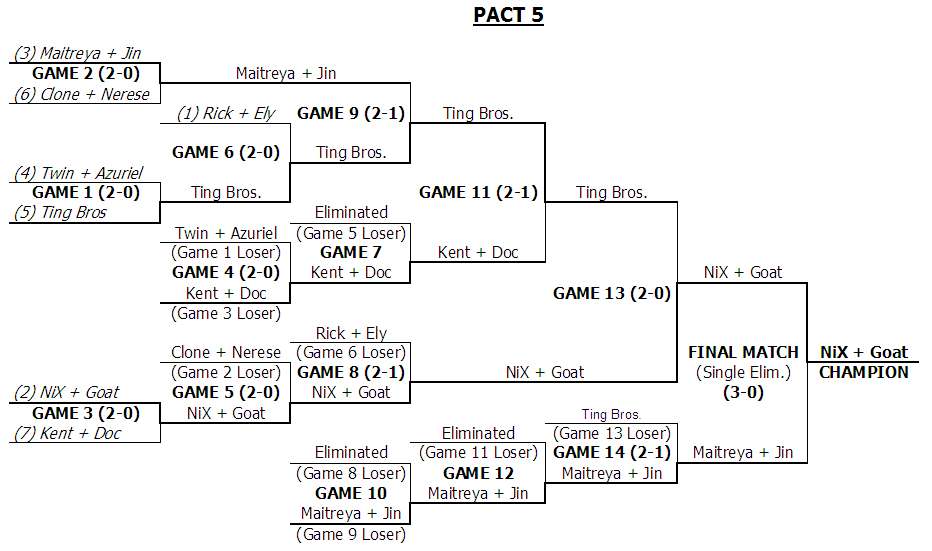 After the tournament, most of the participants, including me, seemed to be in an AC refractory period. The rest of the night was just spent playing other casual games, eating more delicious heart-cloggers, and just chilling out. A few folks were still busy harvesting the finest seafood.

All in all, it was another memorable day worthy of going into the RR archives. Raven Republic: Happy birthday! The past three years have been a blast. Here’s to several more!