Niji of Armored Core Universe once again provides us with the latest Armored Core V information. This time she shares with us her painstaking translations of some Armored Core V screenshots, which reveal several of the attributes involved in Armored Core assembly. 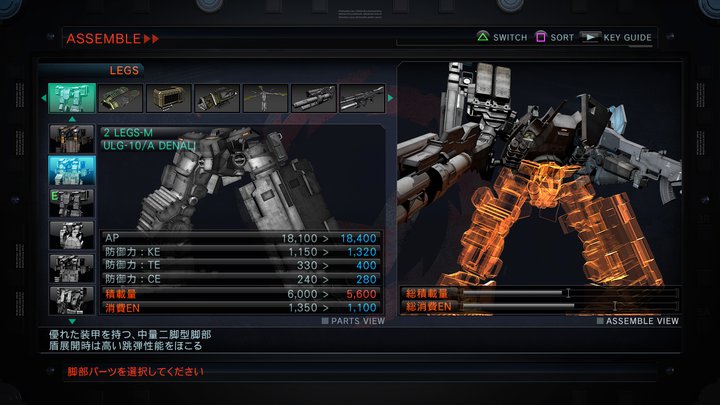 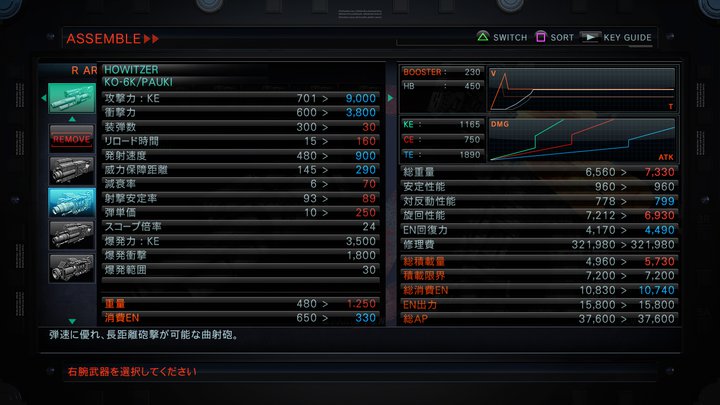 It seems as though this howitzer, or maybe all howitzers, are considered cannons. I am not 100% sure of this, but the reason I think this is because it has a Scope Magnification rating and the previous weapon does not have one. It seems like the designer is switching from some rifle-like weapon to to the howitzer. Since the scope stat and explosions stats aren’t blue/red that means the previous weapon lacked those stats. A scope magnification (zoom-in) feature would make sense for cannons since they must be used in first person mode. Don’t treat this as confirmed information, though. I could be wrong.

Yes, howitzers have an explosion radius.

The Optimal Range stat is a funky translation. The actual stat doesn’t make any real sense to me. The literal translation “Power Security Range” is nonsensical at best. Optimal range was about as accurate of a translation as I could get. As far as I can tell, the optimal range stat is the range in which your weapon will do maximum damage. After this range your damage will decrease over distance. This is purely speculation from me. I’m not really even sure that the stat means what I think it means.

I believe Decay Rate kicks in after the weapon has exited its Optimal Range and entered into its falloff range, where damage decreases over distance.

What we can take from these translations is that:

Update: Do note that another live demo is scheduled for streaming tonight, May 19th, at May 8:00 PM (GMT+8).

For even more information, you can join our ongoing discussion at the Raven Republic forums.