While rifles are fine and dandy if you value finesse, there comes a time that you just want a weapon that satisfies your inner barbarian’s urge to crush anything that moves. You, my friend, need a bazooka.

Rifles and laser rifles are Armored Core’s answer to rapiers. They’re light, elegant weapons that favor speed and precision to do their killing. An AC loaded with rifles is at its deadliest circling a target, weaving between barrage after barrage of gunfire, and killing its prey with several well-aimed shots.

Of course, not everybody enjoys playing the part of the matador. Some of us have different needs, namely, the need to play the part of the bull: To bumrush that said matador, and smash them into the dust like a broken, bloodied rag doll.

And that’s where bazookas come in. If the rifle is a sleek rapier, then the bazooka is a big-ass warhammer. It’s a big, lumbering weapon that’s best reserved on heavier ACs, while its low ammo capacity means that you will have to be especially careful where you land your shots.

Like a sledgehammer however, a bazooka has raw power in spades. Sure, your shots are limited, but it only takes a few of them to shatter an AC anyway. In fact, bazooka shells are so heavy that one hit can momentarily stun an AC, enabling a skilled player to trap and utterly destroy their enemy in one furious volley of hurtin’ bombs.

The real world’s bazooka shares that similarity with its AC kin. When it was introduced in 1942, the US Army envisioned the rocket launcher to be a simple, man-portable way exploding turrets off enemy tanks.

The bazooka’s tube-firing system was developed by Dr. Robert H. Goddard back in World War I, while the 60-mm anti-armor grenade was originally developed by Henry Mohaupt, a Swiss-American researcher who based his design on Charles Edward Munroe’s research into shaped charge explosives (hence the Monroe effect for HEAT shells).

The name Bazooka was itself taken from a brasswind instrument that was popular at the time, and resembled a trombone made from junk parts. 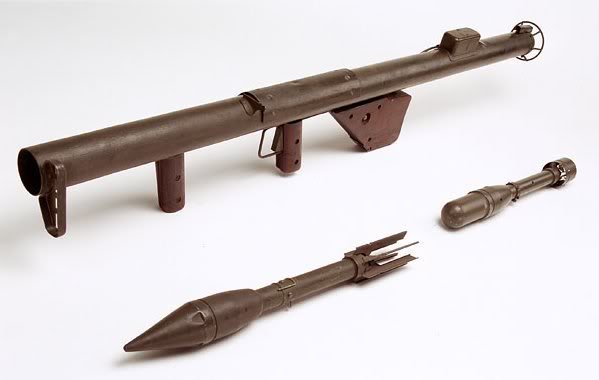 History lesson aside, the bazooka did the business: the M1’s M6 rockets were capable of punching through 100 mm or steel plate, enabling it to kill most enemy armor at the time. That is, if you could ever get it to fire properly.

The earlier bazookas were plagued with reliability issues, with problems ranging from rockets misfiring, or exploding while still in the launcher, which happened to be on the shoulder of its unsuspecting gunner; So aside from flamethrowers, the US now had two weapons in their arsenal that were capable of killing or maiming their users in far more horrific ways than the enemy.

Not a bazooka, but you get the idea.

Then there were the rockets themselves. The earlier rounds were made with pointed noses caused them to bounce off enemy armor when shot from high angles. And even while this problem was fixed newer batches of round-nose M6A3 shells, the bazooka was eventually outclassed by Germany’s later generation of tanks.

Then there was the matter of the Third Reich’s own answer to the Bazooka: The Panzerschreck. Reverse-engineered from bazookas captured issued by the Allies to the Russians, the Panzerschreck (Shrek for short) fired an 88-mm rocket that was capable of double the bazooka’s own armor penetration.