In fact, some weapons only really kick you in the balls when they’re mounted on treads. And no other weapon best exemplifies this than the chain gun, at least during their heyday in Armored Core 3. Feared for their combination of shot velocity, stopping power, and rate of fire, the chain gun was like a machine gun on steroids.

No wait, scratch that – they’re closer to rifles; Fully automatic rifles that don’t need to reload, and powerful enough to tear an enemy AC in half, across a neatly drawn dotted line. Having a chain gun on your AC is like giving ‘Ol Painless to Bill Duke in Predator, with your opponent starring as the jungle he blasts into salad and mulch in one of the film’s most epic scenes.

Awesome weed whacking aside, let’s get one thing straight – AC’s chain guns are not chain guns – that’s a translation error on From Software’s part. It’s a common error among video games, one you can blame on Doom for starting the trend.

An actual chain gun is a single barrel system that uses an electrically-powered chain drive, like those found in a bicycle or motorcycle, to fire and eject the gun’s cartridges, instead of using gas or recoil like in most automatic weapons.

Developed in 1861, the gatling gun used a hand crank system that rotated multiple barrels, and to fire and eject cartridges at rates never before seen in previous volley gun designs; Later versions of the Gatling Gun had a theoretical rate of fire of 1,200 rounds per minute, though this was closer to 400 rpm during actual battlefield conditions. 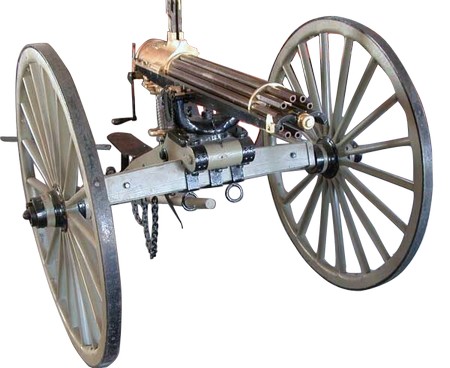 And while the gatling gun was phased out with the arrival of true automatic weapons such as the Maxim Gun, it made a huge comeback in 1959. The jet age was well on its way, and as more and more aircraft went supersonic, the time window pilots had to shoot down enemy planes during dogfights began to shrink.

To address this problem, the United States Army tapped General Electric (GE) to develop a weapon that could put as many bullets into at the enemy as possible. Gatling’s old design was used as the basis for GE’s own multi-barreled autocannon, which replaced the hand crank with an electric motor, and now carrying 20-mm shells.

The Vulcan was born. Capable of firing 6,000 rounds per minute, it would eventually become a standard weapon for most aircraft in the US armed forces.

That’s why our little history lesson doesn’t end with the Vulcan, dear readers, and why we’ll be taking a look at another project that never quite made it. In the early 50s, the US Army were also looking for a deadlier successor for their 40-mm Bofors anti-aircraft cannons.

The resulting mobile gun system would use a new 37 x 219SR T68 cannon shell, and would once again use Gatling’s system to enable the gun to throw out a literal wall of bullets roughly the size of coke bottles at any hostile aircraft unfortunate enough to get within range. 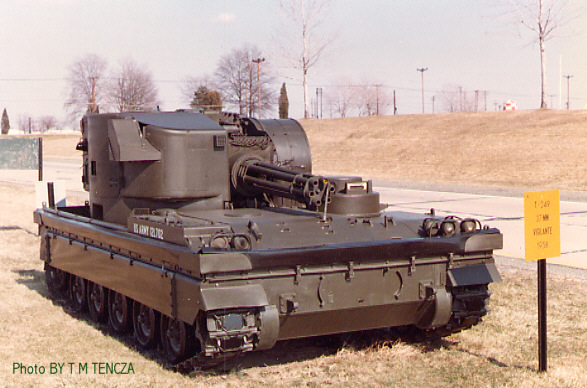 Enter the T249 Vigilante, a gun platform that was capable of firing 100 rounds per minute against ground targets, and 3,000 rpm against air targets. Long story short however, the Vigilante program never got past the evaluation stage, and eventually lost in the 60s to another AA system under development, the Mauler.

As to why the Army would choose the Mauler over the Vigilante, we’ll never know – the former was eventually renamed the M247 Sgt. York, would gain notoriety for locking on to a toilet’s ventilation fan during one firing test.

The Vigilante gets special mention for the fact that the system’s gun fired a 37-freaking-milimeter shell. That is the biggest gatling gun caliber mankind has ever built. It is bigger than the weaksauce Vulcan, and makes even the GAU-8 30-mm cannon mounted on the A-10 Warthog feel tinges of inadequacy.

Honestly – the US Army has a way with taking some really creative ways of kicking ass, and just throwing said asskickery into developmental limbo for some of the worst reasons ever. In any case, we’ll end this brief history lesson by showing you arguably one of the most dangerous heavy mech build’s I’ve ever soon to pack a chain gun/GL combo.