While they lack a rifle’s range or the MG’s sustained fire ability, they’re capable of generating absurd amounts of damage in one quick pass. So when From Software decided to up the ante with Slug Guns, you’d think we’d slapping them on our ACs ASAP, right?

Far from the wonder weapon we had hoped for, Slug Guns suffered from several design faults that made them ineffective. They were heavy, fired slowly, and had horrible shot spread.

And to add insult to injury, they were back weapons; between the time you needed to deploy, track, fire, and wait for the next shot to load, you’d have just enough time to watch as an enemy AC packing SGs gave you a faceful of buckshot.

The slug gun sounded good, in theory. But in reality, it was more a liability to the user than to the enemy. Honestly, who’d be crazy enough to take an artillery gun, load it with buckshot, and hope that it’d actually work?

Apparently the Japanese were, and that’s exactly what they did. Foreseeing the potential threat that aircraft would have on their ships, the Imperial Japanese Navy (IJN) outfitted the Yamato-class warship’s massive 18.1-inch (460-mm) gun batteries with a special Sashikidan shell.

San Shiki means “beehive” (Correction, it actually means “Type-3” thanks to Dr. Rondart for pointing that out), and that’s exactly what it was – a gigantic cluster of shrapnel and incendiary munitions that used a timed fuse to create a cloud of flak in front of incoming aircraft.

And like the Slug gun, the Sanshiki proved to just as hazardous to its user. When the Yamato fired the Sanshikidan for the first time during the battle of the Philippine Sea, the shells accidentally damaged four of the IJN’s own Zeroes, while forcing a fifth to ditch so the idea never caught on.

But while this attempt proved over-sized shotguns were probably not the best way to swat aircraft, the Americans did find plenty of use for the idea in the Vietnam War, particularly for their M48 medium tanks.

The M48’s 90-mm gun was capable of loading the M377 shell, which was basically a shot cup carrying 5,600 flechettes. The M377 was a nightmare for enemies hiding in dense vegetation, but lack of supplies limited its effectiveness.

Eventually, the U.S. built up on this idea, and developed the M1028 shell for the M1 Abrams’ 120-mm gun, just in time for counter-insurgency campaigns following their 2003 invasion of Iraq. 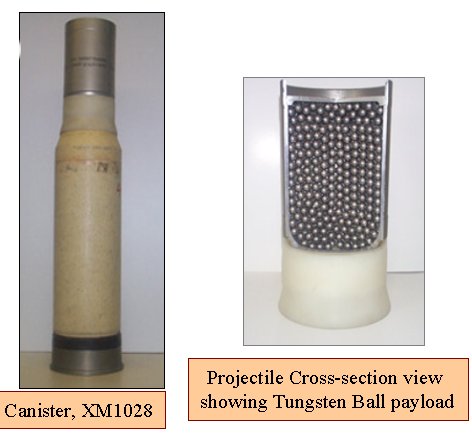 The M1028 used 1150 tungsten slugs, which created a lethal cone of steel out to 600 yards, and was meant to be an anti-ambush round against insurgents carrying portable anti-tank weapons. The slug was just as effective at punching man-sized holes through concrete and cinder block walls at close range.

Of course, ACs are a far cry from RPG-wielding infantry, or enemy aircraft, which leaves one wondering if we’ll ever find a practical use for the Slug Gun.

Aside from humiliating noobs, that is.